My brief from Robert of 2D6 wargaming was "a big hill with woods on one side of the table which the Germans have to assault, a diagonal lengthways road with hard points. Flamethrowers. And smoke. No-one uses smoke in games".


It was to be a two-pronged attack on the three objectives: the lighter Panzers driving for the Bois du Carrefour on their left and hilltop hamlet near the opposite table edge with the heavy Panzers going straight for the market town itself.

After only a few minutes of action, as luck would have it, a dug-in 47mm AT takes out the commander of the central group of 8 Rads.

The screen of Schneider armoured cars and AMR33s fall back from their forward positions in the fields...

...and exchange fire with the enemy recce glimpsed down the Roman road. Map fire from the 105s pours onto Horseshoe Wood. 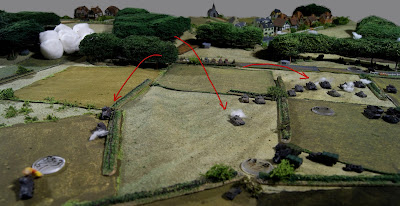 Smoke shells are landed onto the AT position from the 150mm SPGs across the battlefield while the fire from another 47mm, the 25mms in pillboxes and P16s is less deadly for the moment. 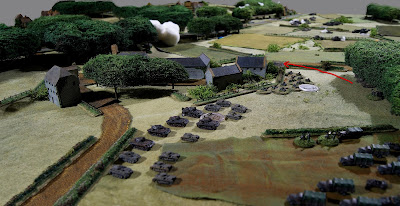 Switching to the German left now, the Panhards are forced back after losing one of their number to the Panzerjagers nosing out of the wood. Kradschützen swarm into the farm. 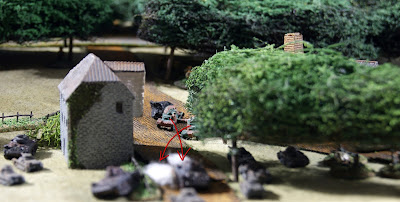 A valiant attempt by the French armoured cars to hold back the steel tide. 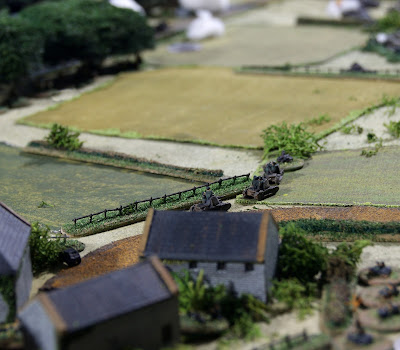 The 47mm SPGs turn to support the centre.

Before their luck runs out, the PzIVs remember to drop smoke on the pillboxes, AT positions and armoured cars to their front. The Czech-designed light tanks, however, are not as well obscured.

More smoke from the 150mm SPGs! 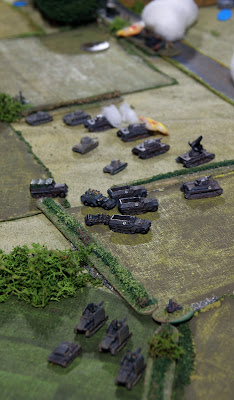 Time for the infantry to do their bit and enter the maelstrom! 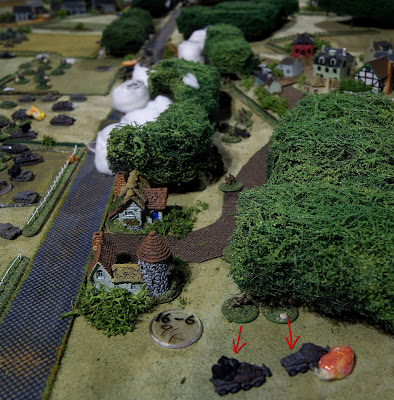 The 8 Rads on the right, attempting a flanking manoeuvre past the blacksmiths, are thwarted by a grenade bombardment.

Lobbing in some speculative rounds by way of preparation to going in with the engineers, the PanzerJagers draw fire from a pillbox. 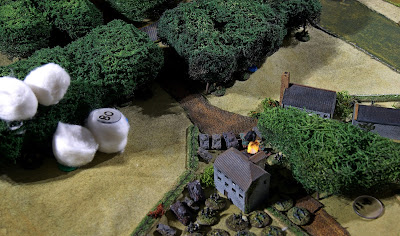 Over on the left, the tank & infantry assault is poised like some kind of steel and tungsten animal, the enemy hard points blotted out by mortar smoke rounds. 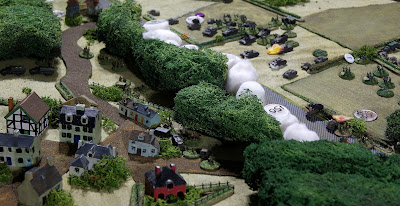 The French infantry fire & retreat back into the gloom of the undergrowth of Horseshoe Wood.

The heavy Panzer company lost a couple of commanders early in the battle, making it a bit shaky and forcing it to pause & rally several times during the advance. [Unaccustomed to the use of smoke, I kept forgetting to renew it before it disperses, not after!]

The off-table 105s switch to the wood facing the engineers. Many of the key defenders are now blanketed in smoke.

Huge amounts of suppressing fire are unleashed on the forest tree line just before the assault on the German left.

After firing off a volley, the French retreat into the underbrush...

...undeterred, the German assault charges into the bracken...

...and carnage ensues. Grenades are tossed into the pillbox, the French reserves are routed and the flank is rolled back.

The Kradschützen squirt through the gap in the French line like deadly tomato puree (from a tube, obviously)... 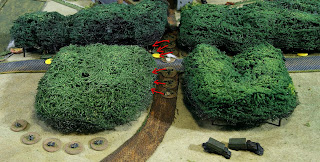 ...shooting up AT guns and creating mayhem behind the Allied lines. 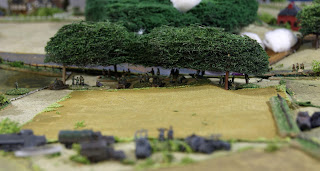 ...and the engineers enter the wood to their front, watched by the German HQ. 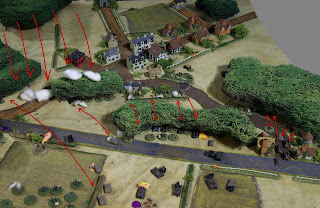 A rather desperate ambush behind the smithy is easily swatted aside by a Panzer 38(t) & 150mm SPGs. The 105s switch target again, relentlessly bombarding the French at every fallback position.

Following close behind the drifting smokescreen, engineers with flamethrowers torch a pillbox.


I stopped the battle here.

The almost intact Panzer III, II & I company, supporting infantry and Kradschützen will sweep around and into the French rear, securing the hamlet and market town itself, with all French reserves already committed.

Although rattled, the heavy Panzer company can easily hold Horseshoe Wood, with the 47mm & 150mm SPGs pouring HE on the hapless defenders.


There were no technical hitches in the game but I did find that with so many units to choose from, deciding which to try activating was a bit time-consuming for a solo player. I am still undecided as to whether I want any player control over the order of activation because I am not sure what this game mechanic would be trying to replicate anyway.

Near-melees in the woods worked OK. Defenders should probably go on alert (to get the upper hand for activation purposes) & fire stationary for one turn at the maximum spotting range within woods of 100m @ 80% to hit. Then fire and fall back 50m (70% to hit) and in subsequent turns continue the fighting withdrawal at 40% to hit. In order to keep the 50-100m engagement distance, the attackers would be on 40% to hit throughout, which seems reasonably realistic to me.

The use of smoke was kind of fun and I'll definitely be using it in most games, now. Besides, it's hard to think of an attacking force not using smoke if it can.
Posted by Les Hammond at 2:58 pm No comments:

I've been activating units by drawing counters up until now, which was nice and random and helps the solo player keep track of what hasn't done anything yet in the turn.

However, after a test run of some of Robert's rules at the 2D6 Wargaming HQ, I wanted to have a go rolling for activation for a couple of reasons:
The skirmish itself consisted of PzII, PzIII & PzIV troops plus Schützen platoon vs AMR33, Panhard 178 & S35 troops plus motorised infantry platoon and 25mm AT section. Entry points were diced for and I used the 2D6 Wargaming objective cards (now available in three colours) to generate the German objective of the road junction and elimination of an infantry platoon for the French.

The Panzers swung left immediately to take the dominating high ground as a base to give support to the assault on the hamlet with the road junction. The rest of the German column and the French column (spearheaded by their armour) met head-on at the outskirts of the town, the Panhard armoured cars plugging the gap for most of the game but sacrificing themselves in the process.

The Somuas started a flanking move and found the Panzers. 25mm ATs were sent to the farm to secure the right flank for the Allies, forcing the Panzers into the path of the S35s.

Eventually, the PzIIs made a dash along their right flank distracting a screen of French infantry away, while the Schützen attempted a left hook around the battlefield to drive off the anti-tank guns and to secure the objective. Two thirds of the Allied infantry fell back to the cottages at the road junction.

Morale now starting to crumble, the Panzers were unable to support the Schützen who, although outnumbering the poorly-shooting defenders, could not get a foothold in the hamlet.


I will probably now stick to dice activation as it provides more scope for adjustments, is no more time consuming than drawing tokens and makes the game just that little bit more involving for the player(s).
Posted by Les Hammond at 12:14 pm No comments: