It's been a while since my last game, what with the house move and all. In the absense of a game I have been steadily tweaking, rewriting and rewording the rules including cutting out some of the overwritten, overworked and overcomplicated stuff.

I plumped for what is probably my favorite 12" square terrain board for a skirmish as it has a lot of stuff around the outside compared to some of the other tiles where the visibility decreases towards the middle. (I may move away from terrain boards in the future, or incorporate something more flexible (see MHLuther's Flickr page, who uses a coloured groundcloth and chalked detail and texture as well as lots of scenery)).

The idea behind this game was an unequal struggle between a small but plucky British infantry outpost with a bit of AT & field gunnery defending a village from a German armoured & motorised recce group which has almost certainly overstretched its lead on the main body. The German CO had been tasked with a headlong advance into the village and with that in mind, the armoured car spearhead of SdKfz 222s and 231s hoped to punch through the middle of the Brits, circle about and attack from behind if at all possible while the light tank section and schutzen platoon advanced by stages across the fields.

The first casualty was the commander of the section of 231s. The remainder sidled into the adjacent wood and was gradually eroded away. The 222s fared no better in the crossfire of an 18 pounder and a couple of 25mm AT guns in the narrow lanes, the only survivor managing to skulk back to the laagered transport only with the intervention of the German CO. 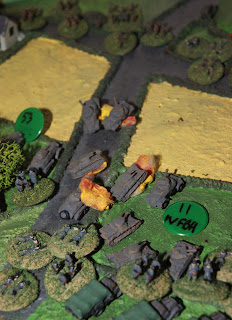 Casualties among the Panzer 1s and German Schutzen miraculously had no effect on their morale throughout the battle, both units managing to advance across the cornfields, into the lane beyond and wheel left, driving the thinly stretched Brits out of the rhodedendron slopes at the foot of French House Hill.

However, the heretofore unengaged British right flank now charged out from Windmill Wood with a surprise flank attack. By the time the German infantry had crashed into the hedgerows, bayonets fixed, there were simply insufficient men to continue the attack, in spite of surprisingly good morale. 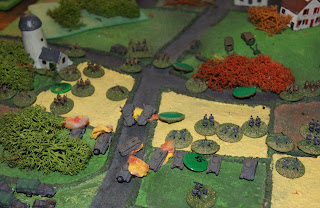 With only a few men and a couple of light tanks remaining, the German reconnaisance force limped away...

I suspected there were insufficient numbers for a German attack so I think I would like to replay the game, maybe with an extra platoon of German infantry or perhaps another German tank squad, to compare outcomes.
Posted by Les Hammond at 12:30 am No comments: