Looking at the landscape around Stonne and possible table sizes, I decided on using just one 35" x 22" wargaming table which, if using what is now my usual 1.5" = 100m ground scale, will give me a 2.3km x 1.5km battlefield. This is enough to recreate all from a little West of Stonne village all the way over to Les Cendrières Farm and including the Northern approaches to the escarpment and Mont Hébreu and the Terre des Dix Cents.

I found the insulation foam landforms that I had always used for fictional games a bit restrictive for recreating an actual landscape, so I had to chop them about a bit. Fortunately I had some old river bend sections which were geographically too extreme for most wargames tables, so they got customized for this scenario.

This will be the scene for a series of encounters, recreating the various attacks and counterattacks on Stonne village, involving elements of:
I will be making significant use of Walter Moore's Armoured Fist Stonne scenario booklet (which is available on Wargame Vault here), as he has done much of the organizational work already.

The only delay might be in putting highlights on a few Panzers for photography reasons.
Posted by Les Hammond at 7:12 pm No comments:

Pondering Tanks 'At An Angle' and the 'Glancing Off' Effect

There is usually a mechanism in rule sets covering AFVs & anti-tank fire to determine whether front or side armour should be targeted. In simple terms, attackers want their AP rounds to impact the target AFV as close to perpendicular as possible to reduce the chance of glancing off.

I have seen rules where a line is drawn from the further rear corner and through the nearer front one and extending towards the attacker. Depending which side of the imaginary line the attacker finds itself decides if front or side armour is targeted.
The problem with this is that the proportions of length and width determine the frontal arc: long, thin AFVs like the SdKfz 232 or Churchill to some extent, are penalised by having a smaller frontal armour arc but more square AFVs benefit from a wider frontal arc. This is in spite of most tanks having front & side armour at an angle of about 90° to each other but this method is not often used.

More satisfactory is the common 45° rule applied to the nearest corner of the target AFV. Again, a line is projected forward, this time at 45° to the front & sides and attacker placement in relation to the line determines which face of the target AFV is more 'flat on'.

Both methods treat the target AFV as metal boxes, with no rounded corners such as on the Sherman or Somua S35. By rights, if a rounded corner is hit, the face of the armour may well be perpendicular to the direction of the shell travel but where armoured faces meet may however be effectively thicker and stronger.

In any case, until recently there was a penalty in my rules if aiming at armour presented at shallow angles. This was to penalise attackers aiming at weaker side (and rear!) armour which may be at a far from ideal angle for penetration, thus simulating the 'glancing off' effect. At the same time, although I do not plot the fall of shells as such (or even take sloped armour very much into effect), I did not want to disallow targeting weaker parts of AFVs on some arbitrary principle of angles, if such shots might have been attempted in real engagements.

So in bed the other night, I got to wondering if there was a geometric formula or mechanism to decide the issue once and for all, obviously taking into account the target position/angle and also the relative thickness of front & side or side & rear armour but not the sloping of glacis plates and so on which would be another matter.

As expected, it is a very complex subject.

High velocity rounds (I suppose this could include the 2pdr and 37mm L45  as well as the 88mm Flak, during the France 1940 period) generate a good deal of heat on impact and can penetrate due to the softening of armour and grooving caused by the shell.

If we look at a Panzer III, which had a nominal 30mm of armour front & sides, one of the two faces is going to be presented at somewhere near to 90° to the LOS from attacker, so it doesn't make a lot of difference whether front or side is targeted, using this model. A Panzer IVD with 30mm of armour on the front and 20mm on the side is a different prospect. You would think that having 30% thinner armour on the sides means that shots would be able to strike at slightly more oblique angles and still be somewhat effective. Although there are exceptions, many tanks seem to fall like the Panzer IV into the 1.25 to 1.3 front to side armour ratios (at least in France 1940) but is that enough to justify taking shots at armour which is going to be angled at 45-60°?

I would say for game balance, it is not:

Perhaps it would be possible in some 28mm or 54mm 1:1 wargame but on reflection, it's not something I would want to simulate!
Posted by Les Hammond at 2:35 pm No comments:

Someone in the France 1940 Wargaming Facebook group posted about receiving Critical Hit's Stonne boardgame and while looking into some of his queries about the action, I found out why so many gamers end up playing out this scenario.

The village changed hands 17 or 18 times in the space of a couple of days but I don't know if you can call it a skirmish as there were apparently 30-odd dead tanks in the aftermath.

I couldn't resist doing a few Then & Now's with some photos taken by (presumably) the eventually victorious Germans (there are loads on the internet and beyond)...
Pz IVD number 711 was photographed a great deal by passing Germans due to the graves of it's crew alongside... 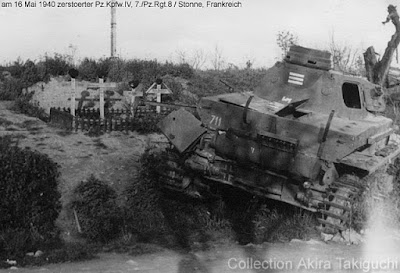 Some of the French Char Bs hulks in Stonne itself...

Then I started planning the table size and looking at the landscape a bit closer, to see what features I'd want to include in the tabletop.


From a Google Earth view, I could now visualise the area involved.

It is only 1800m from La Besace to the Gallo-Roman burial mound, now called the "le Pain de Sucre" in Stonne and 1250m across that valley. Other gaps between the various forests are 90-640m, perfect for translation to the wargaming table.

Then I started screen grabbing various views off Google Earth which illustrate the landforms and
general feel of some of the approaches & landmarks.

This has been an interesting diversion that I've been able to do while away from home or when not working on the production of my Kickstarter forest rewards.

I can hardly wait for the day when I start terraforming the tabletop for my Stonne recreation and 'what-ifs"
Posted by Les Hammond at 9:59 am No comments: