So after yesterday's success with colouring the gaming cloth it is time to start carving up foam for under-cloth hills.

Originally scrounged off a neighbour, the stuff has been hanging around for ages. My brother-in-law is having one sheet for his model railway.

Cut down the middle I now have several sections approximately 36mm thick which will be plenty thick enough for the majority of undulating agricultural land. I might save some of the original thickness bits for escarpments, for example, when recreating the town of Cassel. 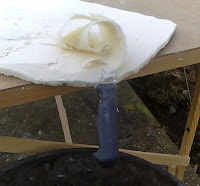 I used a steak knife to cut the foam to size, going about a centimetre deep to start the cut off, then hacking all the way through. The shallow initial cut meant that the foam didn't split in the wrong direction and the thinness of the blade helped cutting round corners .A carving knife had a whippy enough blade to enable distorting it whilst sawing to scoop sections out or for shaving layers off.

I now have more than enough to cover two pasting tables placed side by side although a lot of the time the terrain will be fairly flat, completely flat (in places) or only slightly undulating. The river sections shown will probably only be used for special scenarios requiring a deeply cut valley (for example, crossing The Meuse or the attack on Fort Eben Emael) 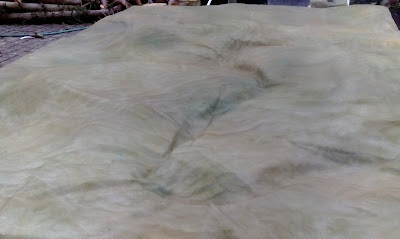 The new gaming cloth on the table shown above. Just add trees, fields, houses, tracks and rivers. With all the hill sections used the landscape is probably rugged enough to recreate the Ardennes sector. May have to make/acquire some thinner contours.

Posted by Les Hammond at 4:59 pm No comments:

I have been hankering after new wargaming terrain system for months.

Frankly, I was bored fighting over the same old crossroads, river crossing and field network 30cm sq hardboard scenery tiles. Bless them, I only made them about 30 years ago during wargaming burst part one. They were a bit too flat with mesa-like hills looming up in the middle somewhere and were in desperate need of flocking or something as the original finish was whatever tin of green paint my dad had spare with black and other colours drybrushed in for shading. 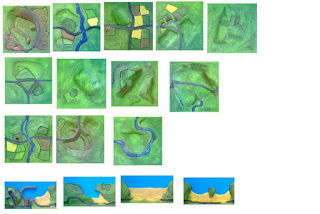 I decided to go down the Mark Luther route as I call it as his is the best example of this terrain method on the internet and probably elsewhere.

He uses 8' x 6' tables or thereabouts, places a large number of shaped polystyrene hill sections to form rolling undulations, often taping them into place. A variegated ground-coloured cloth is thrown over the top, eased into any small gullies and felt & carpet-like material is spray mounted into place for fields & rough patches. Roads & tracks are drawn on with chalk pastels and other pieces added like trees, buildings, hedges & telegraph poles.

So an old 'ivory' coloured bedsheet, trimmed to fit two pasting tables when bolted together, was dyed first with Dylon Pebble Brown hand dye then Olive Green (£4-6 in Wilkinsons or The Range) in the hope that it would...well I did not know what to expect, I think I hoped it would somehow mingle in some way.
That ended up a plain sage green so I then balled it up tight and bound it up with string in a few directions for a random tie-dyeing effect. I had to do this three times for the effect I was looking for, possibly because the dye wasn't up to temperature this time but came out a quite nice sage green with dark khaki brown mottled patches.

Going down the tie-dye route from the outset with Pebble Brown would have made an acceptable cloth for desert warfare.

Next to spray some random patches of green, brown and possibly some sort of dry grass kind of colour. 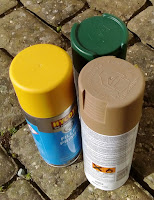 The only yellow I could find was Hycote filler primer (£6 from The Range; Halfords had some for £8) which is more like a ripe sunflower field than dry grass of the Pas de Calais region! Again, the only green was a rather rich bottle green Plasticote in a Super Satin finish (£4 I think, from The Range) and Rustoleum 'Painters Touch' in Nutmeg satin finish (Yorkshire Trading at £4 a can) for a dusty brown.

I hoped that the surface of the cloth was going to be adequately uneven and the spray coat thin enough for the satin finish etc to be invisible and this proved to be the case.

Even the slight breeze lifted the cloth outdoors so in spite of the budgerigar & guinea pig, I sprayed the cloth in the conservatory on some sheets of plasterboard, from a distance of about 40cm with very short bursts. I think I went over with each colour about four times altogether, building up the effect, being especially careful with the yellow.

One technique I discovered by accident was to spray from a low angle almost across the surface of the cloth. In this way, the spray caught on the slight creases in the material from when it had been washed after dyeing giving a sort of false 3D look.

It remains to be seen how it will wash up (if, indeed I am permitted to put it in the other half's machine). Before it had dried it was quite easy to rub the paint off if handled roughly.

When I find a decent dry grass colour I'll be spraying it a bit closer to what I really wanted.