For this scenario, instead of dividing up the attacking forces, I concentrated the attack on the open ground with the defending Allies keeping the original positions. A platoon of French infantry (which arrived as a wildcard in the previous game) was due to arrive somewhen on turns 5-12. 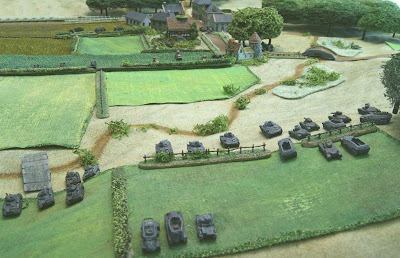 German armour and Schützen pour down from the high ground...

...moving fast, they are easily spotted by the P16s & anti-tank guns, losing a Pz III to a 2 pounder at extreme range, with one of the Czech-made tanks accounting for a French armoured halftrack in the forward screen. The carriers call in the approaching German armour to HQ who send out dispatch riders to Allied units who are without wireless.

Surprisingly, the Pz IIIs are shaken by their first casualty and pause in the river bushes.

In spite of being on alert, a shot from the Boys-armed carrier of that section pings off a Pz II. The commander of the Schneider halftracks nails a panzer in the flank but revenge is swift from the second line of German light tanks.

A dispatch rider arrives at Blacksmith's Copse and delivers orders for the FTs to advance...

...but with their poor vision they are unaware of the German infantry lurking in the stream bed.

Dazed by ricochets, the Pz 35t crews keep their heads and account for another French halftrack armoured car. The Pz IIIs, however, fail to rally and continue to flounder in the concealment of the stream, unlike their lighter Kameraden who press on towards a hedge in the face of rather deadly 2 pounder fire.

Disaster on the German right flank! A Pz 35t clanks to a halt after a hit from an FT and the troop CO's tank is brewed up by an incredible shot from a Boys AT rifle. In fact, the unit morale will never properly recover. 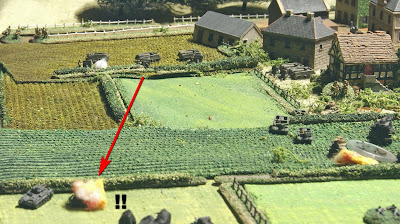 It's only turn 6 and the French infantry reinforcements have turned up, plus on the same flank (just as they reach the concealment of a hedge) a 2 pounder takes out the CO of the Pz IIs.

The Boys sharpshooter continues to wreak havoc on the German tanks but the Pz IIIs (now supported by the debussed Schützen) scrape through their morale check without losing a level. Beyond the forge, a cascade of grenades has no effect on the FTs but a 35t, halted due to being shaken up, takes careful aim on what turns out to be the commander of the FTs. 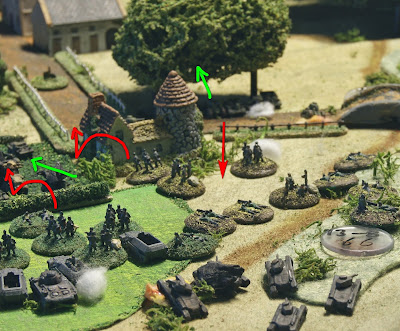 The Schützen close in on the carriers and hurl grenades -no effect once more, their targets falling back. The French light tanks in Blacksmith's Copse cause a few casualties among the German infantry and begin to fall back, too... 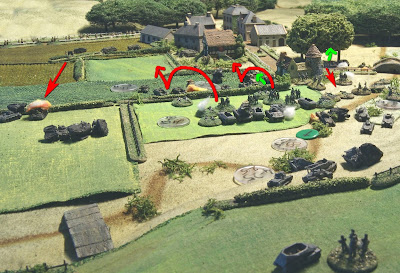 ...while on the left flank the 2 pounders claim the last remaining Pz II.

With no other armour targets, the last P16 destroys an overexposed Hanomag... 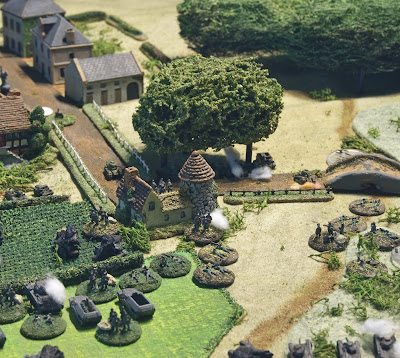 ...but the German infantry seizes the forge. 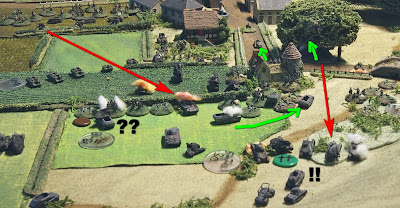 A parting shot from the FTs falling back destroy a Pz 35t struggling in the boggy ground, shaking them up and forcing a halt. The last Pz III -the commander- takes out the final P16 but is in turn picked off by a 2 pounder. The nearby left hand Schützen section, unable to advance towards the carriers across open ground, hunker down securing that flank while the rest of the platoon work their way towards the forge to link up with the infantry. 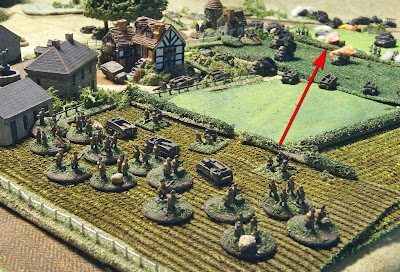 At the same time, the French infantry hurries over the fields to back up the carriers. 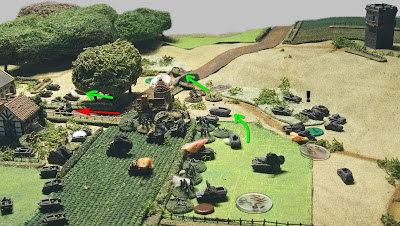 In their haste to cross the ground between the forge and the rest of village, the Schützen lose track of the carrier and scout car receding into the shrubbery. But the infantry arriving in the garret rooms of the smithy see the rear of the departing FT and partake of some surprise butt sex using the Panzerbüchse. The remains of the Pz 35t troop, previously attracted to the concealment of the reeds, try to rally and free themselves from the boggy ground. 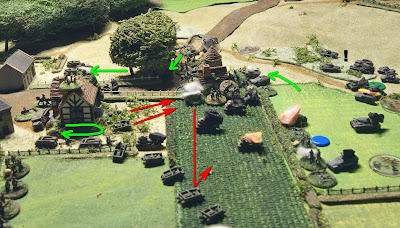 Trying their luck against a carrier across the battlefield, the Panzerbüchse only succeeds in drawing a load of suppressing fire. 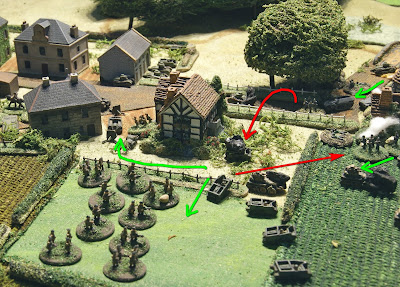 The German infantry begin clearing gardens, destroying a carrier with grenades but suffering some casualties from its supporting Scout Car. The French infantry are almost in position. 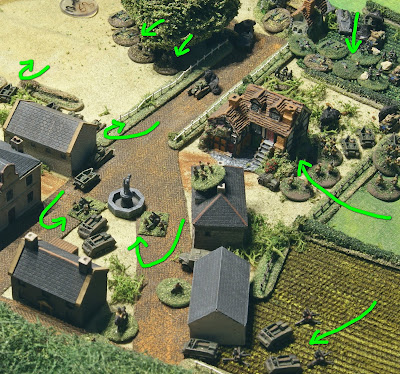 The 2 pounders, surviving carriers, FTs and French infantry begin securing the Western half of the village. 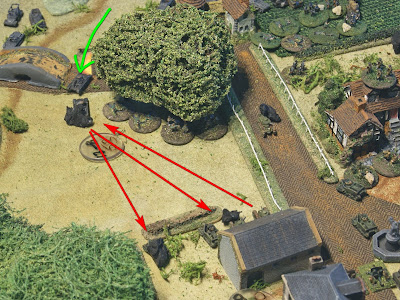 The Pz 35t troop (at the end of its tether, now) unsuccessfully attempts to support a possible infantry assault across the North meadow. 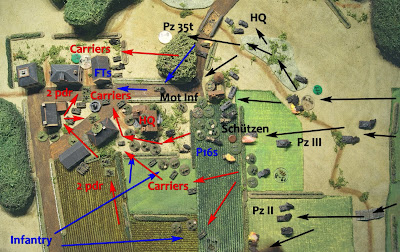 At turn 14, the German attack has run out of steam, the armour either wiped out or suffering low morale, unable to support the albeit still keen infantry and Schützen.

German defeat, only 11% of village taken.
Posted by Les Hammond at 8:26 pm