When I picked up a dozen or so buildings off Mick at the Leven Miniatures stand at The Joy of Six the other day, I started saying to him that I hadn't finished the last lot but had to admit that in fact I'd hardly started the previous batch at all.

I do have enough to put together small farms and villages using my metal pre-Navwar Heroics & Ros buildings but the paint jobs are very scruffy now, having rattled around in Elastoplast boxes for over 30 years. Anyway, the Leven resin jobs were just too tempting, same goes for the thatched and leafy cottages I got off Ebay of undetermined provenance. 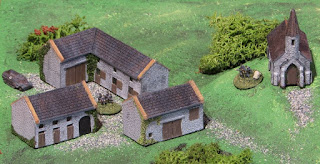 I made a start on some simple farm & mill buildings that looked solid enough to be made out of slate blocks with a slate tiled roof, I suppose much like constructions near Welsh quarries, although the texture on the warehouse walls is more like cobbles, there was enough on all surfaces to be able to dry-brush. I was going for a fairly plain utilitarian slightly rustic look, hence the ivy and so on. Paints are all Humbrol because all my older stuff is done in it (there wasn't a lot of choice in those days) and I didn't fancy changing. 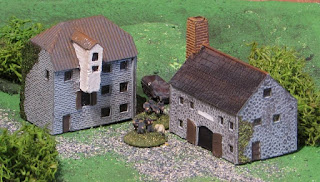 Easy paint job and functional on the table top.
Posted by Les Hammond at 7:43 pm No comments: 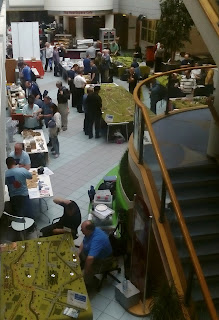 Set in the Sheffield Hallam University atrium this time, the show this year was quite a bit bigger than 2014 with two very large Napoleonics games present.


Although it was mostly sunny all afternoon it wasn't too hot under the glass roof but this made photography awkward with the shadows of roof trusses on some of the gaming tables.

Luckily I had decided to travel light and only had a mobile phone for picture taking so quality wasn't going to be of paramount importance anyway!

After a quick look around I had a long chat with the gamers at the Gorodetschna 1812 table where they were having a lot of fun with a Saxon flanking manoeuvre around a somewhat swampy central battlefield where the Russian and Austrian main forces were faced off.

Having watched a few moves I was dying to ask them about the figures and it turns out they are made from MDF, made by Commission Figurines who had a stand next door, are even cheaper than Heroics & Ros but still look really good on a large scale battle.

On then to the Polemos Napoleonics table where I had an interesting talk with Stewart, the Baccus technology guru regarding rules detail and how it can be pared down and still get a realistic outcome and had a demonstration of the rules app for android and an exciting tool it looked too! The free version is said to be a manual combat calculator whereby the player selects the combatants, ticks the modifier boxes and the app gives you the result. (Even on-screen dice which can be rolled by shaking the device!) The paid version will have (amongst other features) an army generator which will enable the player to select the firing unit and any shaken effects are automatically remembered and applied from previous combats.

I got roped in to play on the Milton Keynes' DBMM Battle of Lake Trasimene game but quite enjoyed it once I started routing a some of the Roman cavalry.

At 2pm I attended the seminar for the talk about Polemos rules design and more chat about the rules app.

Then to the Heroics & Ros and Leven Miniatures stands to collect my pre-orders.


It's amazing to see how the Leven Miniatures range has expanded in the last few years and casting improved; it is certainly not the little hobby concern that I once thought it was. Must paint some buildings soon! Got some PerfectSix scenic detailing bits here as well. As for my purchases from H&R, I only needed some A13 mk1s & A9s to reorganize my cruiser squadrons a bit, plus a few other oddments as usual.

Some other eye-catching games:


Finally, I would like to thank the Wyre Forest Gamers and Per Broden, not only for putting on a good-looking game but also for storing my luggage under their table while I wandered about!


It was a great show (I only had time for one coffee, a stimulant drink going untouched in my backpack and was too interested in things going on to notice the cafe closing so went hungry) and I can only apologize for not mentioning all of the games. With luck there will be more comprehensive show reports somewhere with more (and better quality!) photographs.

In an early version of the rules, a graphic chart was used to determine changes in morale levels. I thought it was quite nifty, not having to consult another table of figures or do any further calculations beyond the initial roll and it served more than one function: where your adjusted dice roll plotted on the chart told you any test-related actions the unit had to take and the adjustment to the unit's morale score. 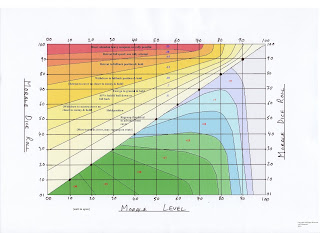 Then I did away with the chart (one less quick reference sheet to find on the gaming table), rendered down the morale effects into just five brackets and knocked up a simple calculation (something that could fairly easily done in the head) for the apres-roll adjustment of the unit morale level, depending on how well or badly the dice went, so that there was a built-in possibility of rallying (or for morale to deteriorate) whenever a morale check was done and using the actual morale test roll to do this, which is the kind of thing I find elegant.

Although not into English Civil War gaming (yet!), I've been looking at the Polemos rules as they have some interesting game mechanics which I saw in an exhibition version at Joy of Six 2014. Combat & terrain effects all conspire to imparting levels of shakeness to a unit, resulting in degradation of coherence, effectiveness and eventual routing off the gaming table.

I decided to apply this somewhat to my rules so that now a failed morale check simply leads to dropping down by one morale bracket (which could be regained in subsequent turns by rallying if the unit was lucky enough to be allowed to do so). I still retain the morale dice roll and adjustments (a few daft or infrequently used ones have been thrown out) as a kind of saving throw mechanism and also the unit strength percentage on-table green tiddlywink (again, less notebook or post-it rummaging) but that is all there is now in terms of number crunching.


The colour coding is for the use of really small tiddlywinks until I sort out the scenic markers, which I think will 'disappear' into the terrain or at least obviate the need for fluorescent arrows with 'fall back' and the like written on and scattered all over the battlefield. Most of these miniature scenic details I will be acquiring from PerfectSix Scenics at Joy of Six via the Leven Miniatures stand this coming weekend.

While I was at it, I worked out how I am going to handle the morale of detachments of sections and the main body, after agonizing for months over how to recombine the independently arrived at scores with some sort of weighted or averaging calculation: I am just going to have the smaller detachment assume the morale level of the larger one (probably the main body) for simplicity's sake.

So that's that sorted, nothing left on my hitlist of anomalies to iron out.

More to follow on the Joy of Six.
Posted by Les Hammond at 2:19 pm