Testing the Enemy Generator rules today, which grew out of my thinking about how to do 'blinds' for solo players.

The concept so far as I have taken it, is that the solo player picks his force and simply makes his way across the table from the starting edge to the opposite side or alternatively, towards any objectives. Initially there are no enemy units on-table but there are also no blinds or tokens of any sort, so the solo player is essentially exploring a landscape devoid of any known threats or clues.

I hate to use the term but it's a kind of pop-up WW2 skirmish game, if you will.

My army selector charts obviated the decision about what 'friendly' units to use (which is what I call the starting forces of the 'active' initial side):

[My light cruiser squadrons are A9s & A13 MkIs and my heavy squadrons are A13 MkIIs and A10s, none of which existed in those combinations, strictly speaking. Confusion prevalent in France at the time and tank availability allows some artistic licence.] 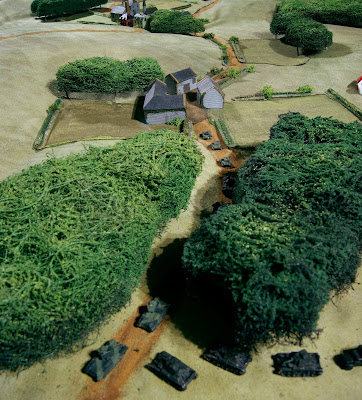 Ground scale was increased from the usual 1" = 100m (which I had used since my WRG 1925-1950 days), to 1½" = 100m, a slight increase for aesthetic reasons. Entry point was diced for, conveniently enough where there was a road. I immediately decided there should be a safe zone of 1,000m to get the 'friendlies' away from the table edge, so the leading MkVI tanks would get to the farmstead before I started dicing for enemy units. 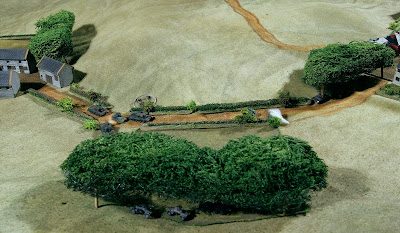 No enemy were immediately rolled on leaving the farm courtyard. First contact came in a battering of 20mm cannon from the treeline to the right where a detachment of SdKfz 222s & an 8-rad were lurking. One MkVI brewed up and the others sped off, a PzIVD troop generating in the wood round the corner as they approached. The German armoured cars backed off... 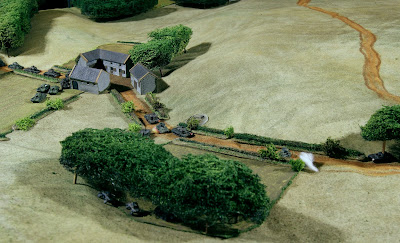 ...as the cruisers fanned out across the fields. Only the speed of the light tanks saved them from the point blank Panzers' guns. 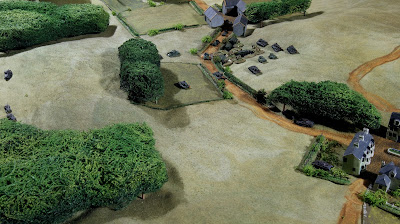 The tougher A13MkIIs squared up to the PzIVs manoeuvring in the village back gardens and other cruisers attempted a pincer movement: A9s struggled up onto the high ground on their and the A13MkIs followed the trail of smashed saplings in the wood. Meanwhile, the armoured cars had circled around in the dead ground behind the hill crest. 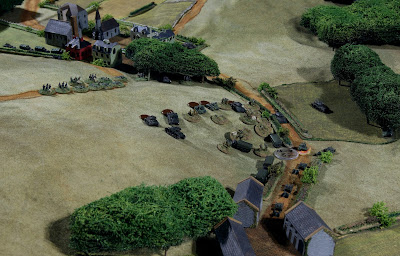 Taking care not to expose any more than their turrets, the cruisers nearing the top of the ridge find their way barred by enemy infantry.

The A13s now on 'round hill' and the PzIVs slug it out at 500m; an A9 on the ridge lurches to a halt, surprised by a Panzer IV nestled in the bracken at the foot of the slope. Luckily for the British tankies, no enemy are spawned in any of the areas of concealment to the right of 'round hill' or towards the village.

A Feldwebel began to lead a section in a sneak attack around the back of the A9s. 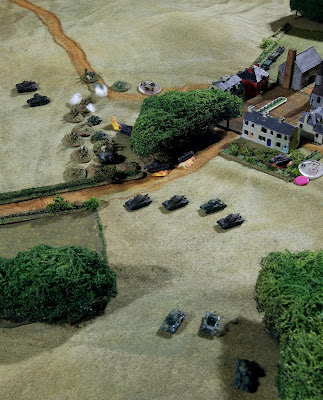 Some good shooting from the British cruisers despatched the outnumbered and wavering Panzers to their Valhalla.

[The morale markers are 20mm clear counters from Patriot Games in Sheffield, the same place I got the 16mm green ones that I used to use and the 12mm counters in a multitude of colours for reaction and other markers (eg: pink = shaken). They are excellent people to deal with, especially if you have odd requests. The new ones are a bit bigger so easier to write on and being clear, they disappear on the table quite well]. 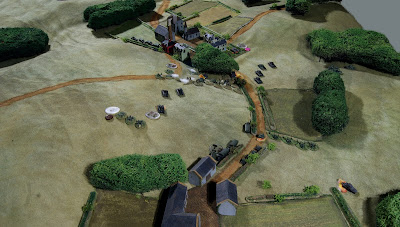 Convinced they would get some of the AT guns facing the opposite way, the 8-rad commits himself to his surprise attack but the French gunners get the drop on him. 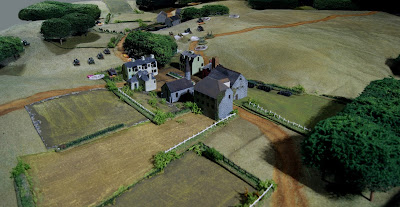 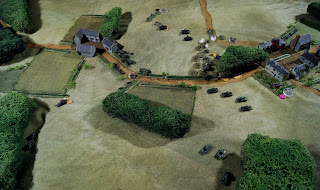 The enemy generator rules worked exactly as anticipated. The Germans were simply unlucky in repeatedly not spawning anything in the South East of the table in spite of the two A13 troops well within spotting distance of some good hidden positions.