I am quite happy using alternate turns (I fire & move; you fire & move) as it allows stationary elements to get the first shot on advancing units and precludes elements firing at the end of whatever charge move the unit may possess. However, I gather this method is looked upon as being old-fashioned, unrealistic and/or (lawks!), clunky, so I decided to see if I could make any system improvements. 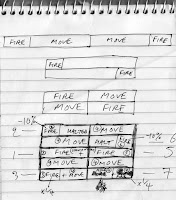 I made some notes and had a couple of goes at drawing up timelines for the complete turn to see if I could break it down into parcels of different activities which could be allocated certain portions on the timeline.

I concluded that high speed factor or stationary weapons could pretty much pick the optimal moment for firing, whereas lower speed factor guns (in single man or low traverse speed turrets) should perhaps be restricted by having to be discharged in the middle of the Action Phase, in other words, neither at the start of the phase when targets could be prevented from moving at all, nor at the end when advancing enemy may have reduced the range.

I noticed that all the movement parts of the turn could be pulled together into the middle of the turn, which
was something I had thought about several months ago, whereby the fire and movement phases alternately overlap. The actual order of movement of elements may be determined by speed, for instance, FT17s committing their movement before SdKfz 232s due to their much slower speed

Similarly, I am working on integrating morale & comms phases of the turn into the schematic and some sort of 'speed factor' for main (perhaps all) armaments. This will take into account such factors as the manpower in turrets (very detrimental for many French & Belgian tanks), electric gun traverse, etc. and may be result in penalties for one-man turrets or restricting them, even if stationary, to only one shot per turn.

I think I need another playtest soon...
Posted by Les Hammond at 4:41 pm No comments:

I have been thinking about tightening up the communications rules for a while as it was a bit of a free-for-all, especially in the higher-ups, not that it seemed to affect play mind you.

Looked up one of my references on the web French Radios & found that those French Platoon COs that actually had radios only had a range of 800m with the ER40. British & German platoon COs had far superior hardware but I decided to peg it at 1,000m for comms with all infantry company COs.
As regards AFVs it was implied that if a tank had a radio it would have a range of a few kilometres but I could not find anything concrete. Bearing in mind the reliablity of valve sets in jolting vehicles and the vagaries of atmospherics and so on I decided to bring them in line, to some extent, with foot troops.
For the higher echelons & forward observers I cut them some slack giving them a 2,000m range. Combined with some customised lists of which AFVs & units were radio-equipped, these amendments should bring a little more realism in an important area.

All a bit arbitrary but until someone writes a book about it that I can afford or a better website pops up I will, perhaps, have to settle for playability over realism.

It's only a game after all!!
Posted by Les Hammond at 9:55 pm No comments:

After drawing up the Suppressing Fire rules for vollies of small arms fire and rewriting those for Morale, it was time for playtesting.


I decided to go for broke and have a purely infantry engagement, no armoured cars, even, let alone tanks. I am not sure how 'realistic' this scenario would be without the usual swarms of armour dominating the show but I just wanted to give the new rules a sound thrashing out. In the event, if the Germans had but a single Kfz 13 they would probably have thrashed their opponents.


Due to some ongoing DIY upheavals and unavailability of dining room tables, a short range infantry skirmish on a 12"x12" board was ideal. A board was installed with a small farmstead and windmill on a hill with a sprinkling of woods and low 'soft-cover-only' hedges bordering fields. 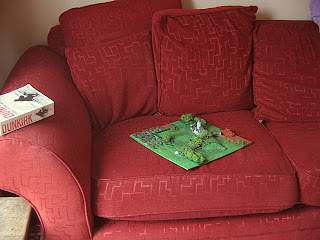 Basically there was one British & one Belgian platoon holding a farmstead on high ground. They had 2 Bren Carriers for flank duty and a Vickers HMG team and that was it for them. The Germans had 4 platoons plus 2 MG42, 1 80mm mortar and 1 75mm IG. Perhaps not a very realistic mix but after all I just wanted to see how infantry battles worked themselves out. 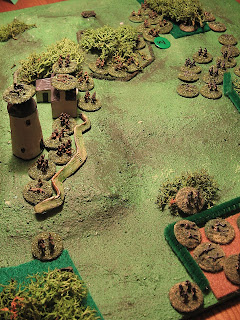 Due to the game's small size it was easy to put it on top of a cupboard out of reach from curious little hands so I could do a few moves & come back to it later or next day. There were a number of occaisions I felt like I could have ended the game when it looked a bit hopeless for one side or another but I couldn't help but carry on to see what would happen.

Several times the German left flank was forced to test morale but each time they held firm; by comparison their platoon in the top left of the final position view stalled with a very low score & couldn't be persuaded to leave the relative safety of that wood.
How these situations came about (which is a feature of the mechanics of my morale rules) is that if a unit has low morale (for example, wavering assault, or desperately outnumbered town defence, etc) and yet it still manages to keep its head, the unit's morale level is boosted, affecting future tests. Thus the assaulting Schutzen dipped as low as 39% but by 'keeping going' ended up around 70% and the hapless bunch in the wood had a series of wobbly moments ending up at 6% thus could not be reused without retesting without probably routing.
As for the group volley rules (resembling some more often used in Pike & Shot or Napoleonics games I used to see as a teenager) whereby you fire 12 rifle groups and 4 MGs at an opposing unit & the resultant casualties calculated in one dice roll, well, the highest number of such firing groups I had at any one time was five, so although I think the rules would work I just don't think they will be used that much.
Next, I suspect I will play a regular sized game with all branches of land armies letting rip...
Posted by Les Hammond at 3:40 pm No comments: