I bought a new SdKfz 250/3 from Heroics & Ros to replace the one which was first painted in Afrika Korps Airfix desert yellow (that's how long ago it was!) and the new one came with a frame aerial so I decided to have a go at making some for the SdKfz 223s & 263's. The workbench photos were taken on my phone, sadly. 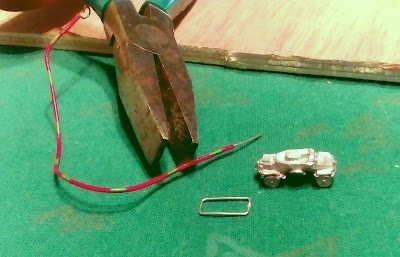 I've got loads of single strand wire (probably steel) from out of telephone cabinets for model railway wiring (the multicoloured insulation makes it easy to trace it under the layout). About 0.5mm in cross-section it was the thinnest I had. 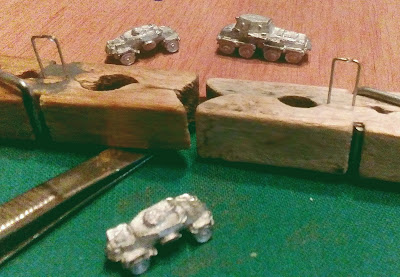 I tried putting in the slight angle towards the front of the frame but it was difficult and just looked wonky, so I just bent the sections into rectangles, butting together on a short side and a blob of superglue bridged the gap. 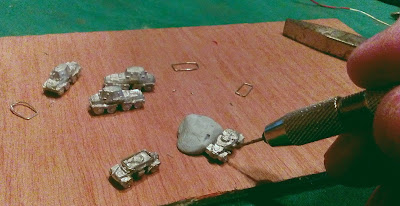 A 1mm drill bit was the smallest I had so I used that in a pin drill to make locating holes for the supports.

The supports initially stuck out perpendicular to the body panels. I realised that if I left the insulation on, the supports fitted the holes better but the wire needed supergluing in place or it could twist within the insulation. 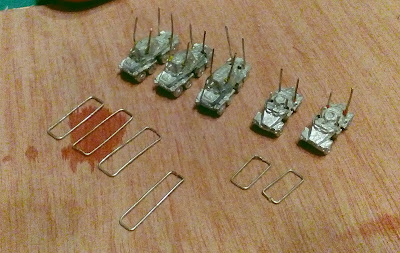 Supports were bent to the vertical for the 223s or at suitable angles for the 263s and reglued where it had come loose. 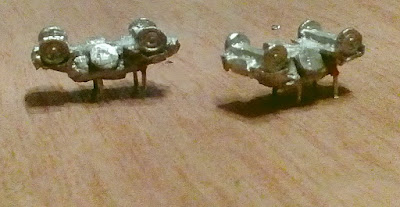 A good way to get the supports on the SdKfz 223s level for the reasonably horizontal frame was to upend them and snip off the excess. 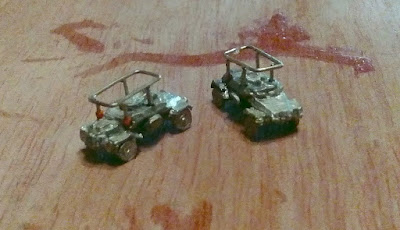 Frames were perched gingerly on top and half droplets of glue applied (I didn't have the gel variety). (The insulation was a bit long in places but once painted, it disappeared).

The aerials for the 8-rads started off rectangular, then a longitudinal central section was dropped in & glued. Cross pieces between the vertical supports were omitted as they were only about 3mm long and were too fiddly for me. The whole was bent slightly over the curved handgrip of a pair of pliers, balanced atop the support and glued. 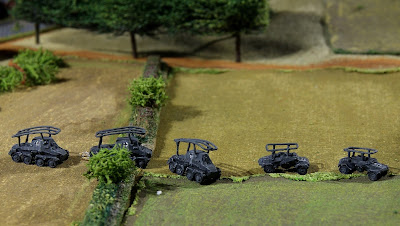 They all got 2 coats of Humbrol 27, an ink wash (1 drop black Windsor & Newton + 8 drops water + drop of washing up liquid) which was dabbed off, Humbrol 26 highlighting. 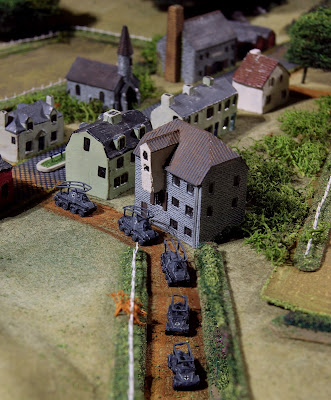 Trafalgar Models balkankreuz from Heroics & Ros were added where possible

Treating myself to a big game as I haven't played for a couple of months. Started off with a low ridge going diagonally across the board with high ground in the other corners. Gaming cloth spread over, roads drawn  in the vallies and saddles and placed a river in a flood plain and a village, which I decided the French were going to defend. A back lane was chalked in as a possible outflanking route and a few pillboxes & casemates scattered about for fun.


One of the lengths of Fat Frank's road (which were an unexpected Christmas present from Robert of 2D6 Wargaming) was used as the cobbled high street, blended with the dusty country roads a bit at the ends with the oil pastels.

Sufficient platoons of French infantry and penny packets of tanks were dotted about to cover the diagonal front with one or two in reserve, along with some AMRs. Another gift from Robert was a pack of his objective cards (available through Wargame Vault) which are an excellent tool for any wargamer, let alone solo player. Unsurprisingly, The French had to hold three buildings, one of which had to be the tallest, as well as destroying a Panzer troop.

With the amount of French men and materiel on the ground, I plumped for light and medium Panzer companies (somewhat under strength as I can't be arsed with all those Panzer Is) and succumbed to the temptation of SiG33, BunkerFlak & PanzerJäger SPGs with several platoons of Schützen and motorised infantry following on. As luck would have it, their objective cards called for the destruction of a tank troop, infantry platoon & AT battery.


While the cavalry, recce and light Panzer company cross the flood plain, the BunkerFlak concealed in the woods target Casemate Nord at a range of 350m and the French 75s, just visible to the spotter for the off-table 105s, come under some nasty counter-battery fire.


The 88s make depressingly short work of the blockhouse and turn on the S35s who are shooting particularly badly but are under orders not to fall back without making a few kills. 80mm mortar rounds begin plunging down onto the Panhards on the high ground.

The French cavalry tanks and armoured cars finally get some good kills as the Panzers press on through the crossfire (dropping to a morale level of 45%) towards Pillbox 3 and a 47mm AT position.


AMR33s arrive from HQ to help stem the oncoming Feldgrau hordes streaming between the woods but the Kradschützen hook around the last wood, heading for the French rear area.
.

The French field artillery reposition themselves down the back lane in the path of the mauled Panzers with an infantry platoon to look after the flanks.


Spewing blue smoke from their cold engines, the FCM36s block Rue du Pont like geta lumbering mechanical tortoises, to allow the Panhards to fall back. With their spotter moving up, the German 105mms begin shelling the village.


Sole survivor of his troop and possibly rattled by the howitzer rounds detonating all around him, the S35 CO can't seem to hit the oncoming 13mm steel barn doors. 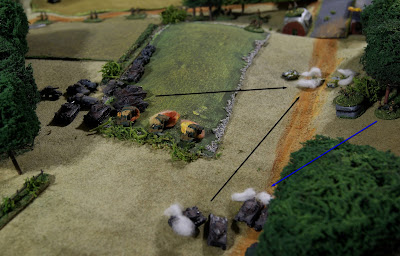 The FCM36s, angling 40mm glacis plates away from the closer in Panzer IIIs, plink away with impunity at the hapless German tanks, helped by a 25mm AT gun and Hotchkiss HMG who is particularly adept at finding vision blocks. The Aufklärungs companie skirt the area while trying to find a weak point in their sector.

German armoured cars probe the upper meadows, protected from the FCMs by the slope of the hill, hoping to outflank the strongly defended wood.


Rebuffed by the French in the wood, the Kradschützen are further harried by the AMR33s & R35s. A lone PzB38 team acts as rearguard.


Shaken by their earlier casualties, the motorcycle troops cannot advance any closer. As they try to rally, French cycle troop reserves and the last remaining AMR push them off the edge of the battlefield.

The Somua emerges from the tree canopy and gets the Panzer company commander in the rear but is one-shotted by the PanzerJägers to his right.


1st Schützen platoon take the farm on the high ground and the assault on Bois Centrale begins.


But after 25 moves, the Germans have only destroyed three penny packets of tanks and armoured cars, at a cost of triple the amount of hardware to themselves. It is true that nearly all the SPGs have survived to support the as yet uncommitted infantry and Bétonville will be taken eventually but the German advance has unfortunately not gone as swiftly as was demanded. 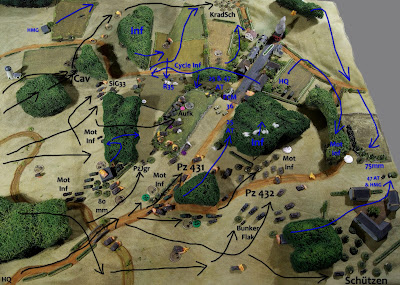