All my games have been 'typical' battles as the terrain tiles did not lend themselves to recreating anything but an approximate setting for a real engagement. Now that I've got a nice gaming cloth and a selection of land forms to put under it, I've been on the lookout for a suitable battle.

Colonel Goutard's "Battle Of France" and Alistair Horne's "To Lose A Battle" are my staple reads for overviews of the invasion of France. Together, I think they give me enough information on actions in the campaign to be able to produce recognisable “based on” simulations without referring to unit unit histories (none from the French seem to have survived the war and probably this is just as well).

Working my way through chronologically, one of the earlier actions that took my fancy was the crossing of the Meuse at Sedan on 13th May. 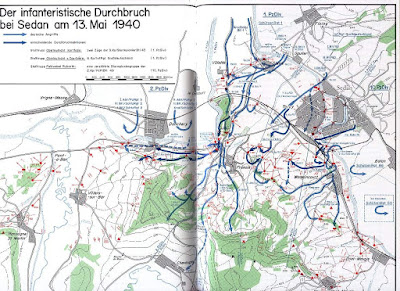 An excellent find was "The Blitzrieg Legend" by Karl-Heinz Frieser which added more detail to this scenario (and the rest of the French campaign) and a fine map from which it was possible to imagine the area as it was in 1940 without the modern waterpark on one side of town and industrial area on the other shown on Google Streetview. Apart from enabling the gamer to see the lay of the land more less first hand, Streetview was very useful for finding landmarks and points of interest in the town which I will try and have on the gaming table for local colour. For instance, the rail line towards Bazeilles (built over when the waterpark was created) and crossing-keepers cottage or small halt at the main road; the Chateau Bellevue on the way to Frénois; the large cemetery above town on the SS Regt Großdeutschland approach; and the pretty Église Notre Dame above Wadelincourt. All good features to help get into the scenario


The battle was predominantly an infantry affair, which I think will be an unusual basis for a wargame, there normally being a dearth of foot troops in Kursk-like "typical" battle tank swarmings. Crossings were attempted at six points in the area as seen on the map, notwithstanding all bridges were blown by the French:


The first and last of those listed were unable to cross the Meuse because of covering fire from bunkers and enemy artillery shelling respectively. The 1st Pz Kradschutzen, although managing to get onto the Isle des Iges, were prevented from crossing the canal between Glaire and Villette until the division's Schutzen cleared the overlooking bunkers here and at Donchery from the rear. The two Schutzen regiments crossed at and followed the NW & SE edges of the town and went on to secure Frenois, Wadelincourt, the Marfee Heights and Cheveuges.


The scaled down units I decided to use (which I hope will still preserve the feel of the battle) were thus:

There are a few things I need to get done in the meantime:

This will be an ongoing campaign series of battle recreations which will give my games a bit more structure than usual.
Posted by Les Hammond at 7:46 pm