I'd just finished a light repaint, putting decals on and weathering all my Scotia Belgian tanks (T15s, T13s & ACG-1s) when I came across the story of the bridge at Briedgen near Maastricht being destroyed in a daring counter-attack by the Belgians. In point of fact it was only a fairly minor canal crossing (the East-West oriented intact bridges at Veldwezelt, Vroenhoven and Kanne being far more useful) and so was rather lightly defended as a result. I did use a bit of artistic licence and threw all my Belgian tanks in, a Fairey Battle ground attack and opted for no German CAP flights in what was possibly a quiet sector of the front, by comparison. 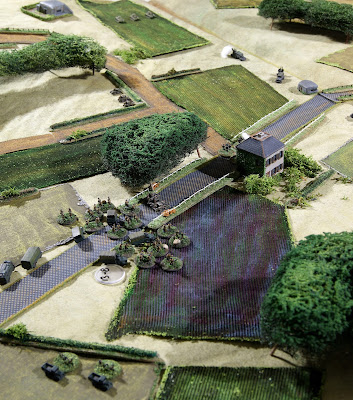 After a careful approach, the T13s shell a roadside villa near the bridge, 60mm mortars deploy and Belgian motorised infantry fan out across the lavender fields. After reporting in by field telephone, the Flakvierling on this side of the canal scarper before the advancing light tanks.

The 47mm guns on the T13s get a round straight through a window, killing half of the German section on picquet and setting fire to the villa. The suppressed survivors tumble out of the back.

Approaching from the abandoned casemate, the ACG-1s drive off two of the German AA guns. 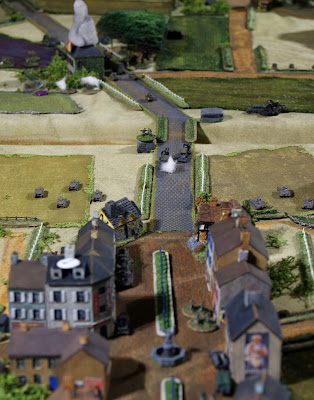 The German light tanks, still without their CO and without proper orders, probe towards the sounds of firing. 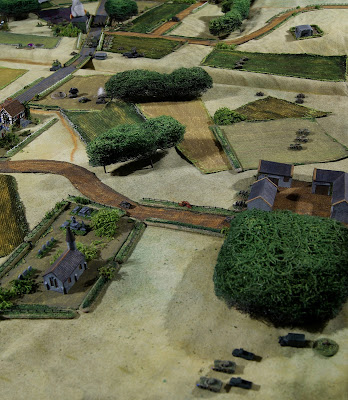 At the allotted time, a distraction flank attack begins on the German side of the canal. Greatly outnumbered, the second Radschützen detachment in the farm lay low to attack the rear of the passing Belgian cycle infantry column.

Engineers sneak towards the bridge covered by the leading penny packet of Belgian tanks. The Panzer IIs go to seek cover in the wood, only to find it is too dense to enter. 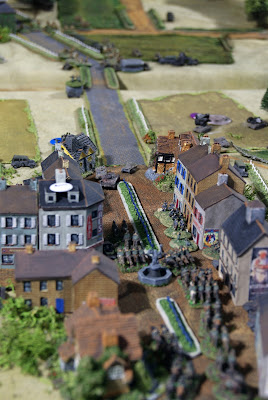 There is a great clattering of hooves in the cobbled market street as the cavalry canters towards the battle. 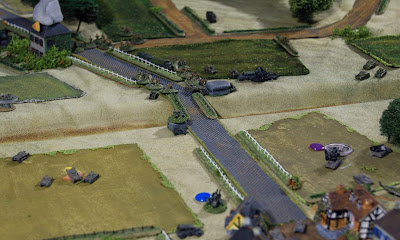 In the open but in position, the 47mm armed tanks keep the Panzers at bay while the Sappers get to work. 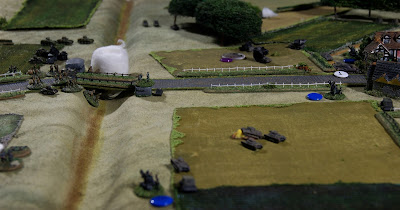 A 'fumble' roll of 100 from a T13 by the blockhouse resulted in a 'bad weather/fog' wildcard, which I interpreted as mist rising from the nearest point of the canal. This was actually quite convenient for the Allies. 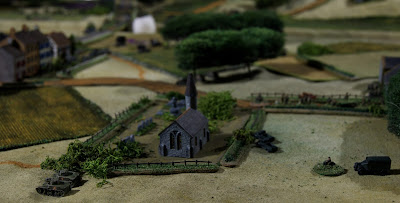 The HQ of the left flank, CO of the ACG-1s and another 60mm mortar section reach the grounds of Brughoven Church. The cycle infantry follow more light tanks into the churchyard and what turns out to be an open wood.

A little later than expected, the bombing run from a flight of Fairey Battles goes in on the village, decimating the already half-strength Radschützen platoon (due to the two detachments on guard duty) and taking out a Panzer III and the squadron Panzerbefehlswagen. 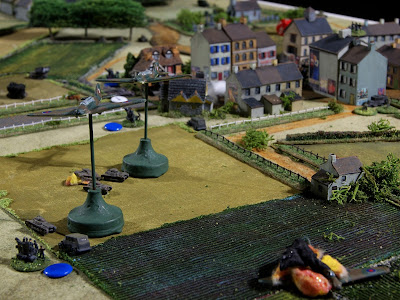 Unfortunately, the pre-arranged flight path took the light bombers directly over the three remaining Flakvierling (blue tiddlywinks = AA overwatch). Ginger catches a packet and nose-dives into a field of sprouts. 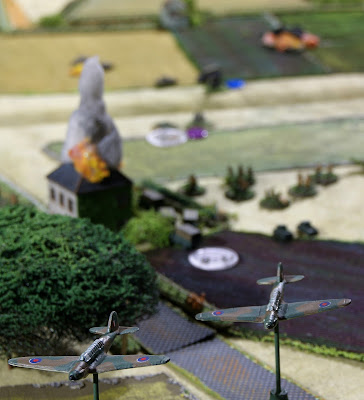 The plucky surviving RAF crews wheel round to line up their second and final bomb run. 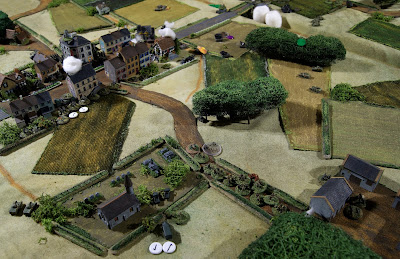 The Radschützen in the farm spring their 'trap' (if you can call it that) but only accounting for one squad killed and another suppressed. In fact, by rolling '100' for the MG34, the wildcard drawn in the Allies favour enabled them to intercept the orders for the as yet unobserved German infantry advancing on the church.

Near the bridge, like a fox caught in the open, the Panzer IIs are picked off one by one.

French armour draws closer and having accounted for or repulsed most of the light tanks in the centre, begin suppressing the Flak guns and shelling the Panzer company CO. The Panzer IIIs break cover in the back yards of the village shops but are faced by no less than five 47mm tank guns, three of which are in the quite decently armoured ACG-1s.

Yet another 'fumble', this time by the Panzer Is while laying down suppressing fire on the far side of the bridge results in them hearing a garbled wireless message ordering them to fall back to cover. Overrun by the Belgian infantry, the remnant of the Radschützen outpost surrenders (yellow tiddlywink. It is possible that I could devise some scenic markers to blend in more but the danger is that they will not be noticed which would defeat the object of them!). 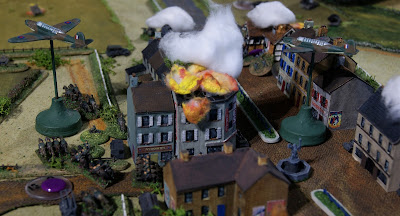 Now fully aware of the flak positions, the Fairey Battles pick their route into the town to drop their second and final bomb load, causing heavy casualties among the evading cavalry and completely destroying what was the German HQ and staff.

On the way out of the village, though, the last Battle receives a deadly burst of 20mm flak to the belly and it plummets into the trees. 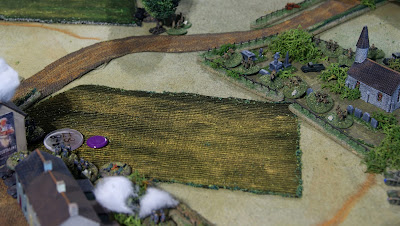 Caught by the ground attack and pounded by the ACGs on the far right, the German motorised infantry are pinned down in the back yards of the terraces. 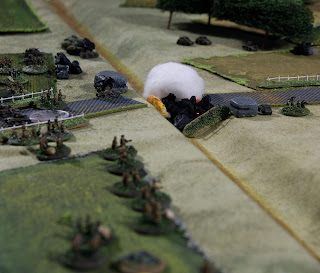 Suddenly there is a huge detonation at the bridge, which is now a mass of twisted steel and smoking rubble. Mission accomplished!

This was, I am certain, the first time I have used ground attack aircraft and AA in a game using my rules. In fact, the last time I had a bombing mission in a game was with Stukas using the WRG 1925-1950 WW2 rules back in the 1980's and was so unimpressed with the lack of drama or feel of authenticity that I stuck to land battles thereafter!

I'd brainstormed my way through some Air-Ground and AA rules pretty solidly for a few days prior to the game (it was about time I tackled this particular 'octopus-in-the-bath'), trying to find a balance between the devastating effects of 250kg bombs exploding all around ground troops and the 'walls of flak' encountered by Allied light bombers.There were no game mechanic anomalies that I noticed, just the usual dice generated randomness which is to be expected (the German cavalry platoon could have quite easily ended up routing as they suffered half a dozen casualties as each time they were testing at -20% due to the air raid but just kept it together) and the heavy losses by the Allied flyers was entirely borne out by real-life events, too.

A little brushing up on garrison activation, I think, as it took far too long for the Panzer IIIs and motorised infantry to 'wake up'. Possibly just dicing as per reinforcement variable arrival time which I devised partway through the game and applied to the Fairey Battles (1 turn late) and Belgian diversionary attack (on time). Also, demolition rules could be a little more concrete (if that isn't a contradiction of some sort) and a little less fudgy for my liking.

I hope to have the Type A roundels from Dom's Decals on the Fairey Battle fuselages next time around too. You may be able to see that the T15s, T13s & ACG-1s all sport his 1/600th scale Belgian aircraft roundels, variously on tank hull or turret sides, my first totally complete tank troops including troop & squadron markings.
Posted by Les Hammond at 4:26 am