I had done some more French tank camouflage so felt I deserved another game although of course I have loads more painting to do.


There was a crease right down the middle of the cloth so I put a road there to disguise it. I rolled a dice for the direction of one road and the third I wanted to send down a cutting between hills and up onto some high ground. It had to turn to lessen the gradient and to explain why the road went that way, I put a farm there. Two of the woods were placed by my daughter.


Rolling for units, I used a full list of everything I've got. Thrillingly, StuGs were first, then Kradschutzen, SiG33s and Panzer 38(t)s. For the Allies, I got motorised infantry, a battery of 75mm, some MkVI light tanks and some foot infantry. That was going to be a bit too imbalanced so I rolled a scout car platoon, 25m AT guns, 3" mortars and a few Char Bs as well. With the gun-heavy Allied makeup I thought I'd let them defend but with the 3" mortars and motorised infantry as reinforcements and upgraded the foot infantry to cycle infantry (not that they did much cycling, it turns out).


The Allies were basically defending (although when I set them up, the only thing that was known was the German 'spawn point'). The escorted SPG column was found to be travelling more or less diagonally across the board to the high ground.

The unsuspecting Germans planned to pass  Belgian House behind the small wood, through Marsh Farm and up onto the hill. (I've since repainted & shortened the tree trunks! These are cocktail sticks inserted from underneath which are gripped by the rubberised horsehair and do not fall out when the tree canopy is lifted off)

I wanted to make a special effort to track the passing of orders in this game because playing solo I sometimes gloss over the exact timings and movements of orders. (So when a CO is activated and wants to issue an order, it is written on the unit's order list and a white counter placed by the recipient. At the start of the next turn, each order is diced for receiving and if successful, the written down order is ticked off for putting into action, building in a 1 turn delay which can go up levels of command for further lag)

Here we see the Allied commander attempting to pass a flurry of orders:

The English must have been 'having tea' because I had forgot to put them 'on alert' (what I call overwatch) and took an extra turn to 'range in'.

The Char Bs have quite a pretty camouflage scheme but they, along with most of my stuff hasn't had a wash or highlights yet. I'd obviously rather be playing games

Belgian House in the distance is called that because...well, maybe it does look like a house in Belgium but that was just what the casting was called (possibly from Tabletop Games in Nottingham or a very early incarnation of Heroics & Ros from their building range). Bought from the same source was the "large house" at the foot of the picture and Red House near the British HQ. The barns and so on are Leven Miniatures.

In this instance it took 3 turns for the Char Bs to receive & understand the order to advance which was typical of the tank radio problems of the day (indeed, if radios were even present).

You can see the variation in figure basings for different units, so that they can pass among each other and not get jumbled up, or need eye-catching coloured markings. Different base paint colour and flock type is all it is, actually in this case the only units present are the cycle infantry and 25mm AT crews, however. 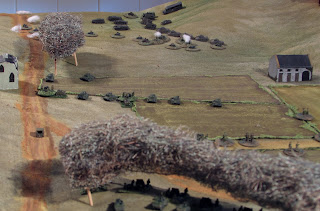 The MkVI light tanks pin down a couple of the Kradschützen and the 75mms lay down a somewhat ineffectual harrassing barrage on the distant road, their OP moving up for a better look.

The scout platoon continues its probe down the narrow track. 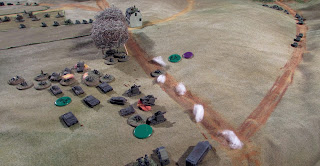 The light tanks cause some casualties among the Kradschützen, a 25mm takes out a Panzer 38(t) and the spotter (now in the house) directs the 75s onto the SPGs (these have 2-3 H&R standing guncrews with bases cut off in the fighting compartment).

I do not keep track of where the CO is in a tank formation: When there is a casualty, I dice to see if it was the CO. That way not I am unable to subconsciously and advantageously target the CO.

(The green counter by the Kradschützen shows there are 11 elements in the unit, the loss of each causes a drop of 9% to the score and the current score is 78%. The purple tiddlywink (to be replaced by 'scenic' markers at some point) means they are 'uneasy' and can only advance if into cover, which they are under orders to do anyway). 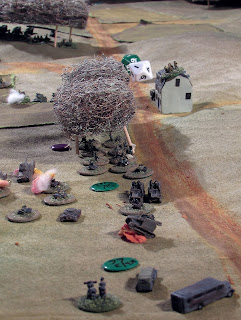 The SiGs turn to blast Belgian House, the probable location of any artillery spotters but they roll 71 & 72 when it was 70 to hit. The Munitionsschlepper SdKfz111 has to stay close as they only carried 3 rounds on board.

Yes, that might even be Rommel, as there are Panzer 38(t)s & SiG33s in the game, it could be the 7th Panzer Division! (Although I don't think they operated with any StuGs, that was the 8th Pz Div but they didn't have SiG33s...)

(Sorry about the dice in this picture!)


The scout cars make their move on the German HQ (who no doubt have that 'turning of the ignition key' movie closeup moment) and the Bren carriers & MkVIs nose up to the brow of the hill. (That's the scout platoon CO at the RVP with a boulder = leader on his base)

If the Panzer 38(t)s get the message (white counter) they will be able to react to the scout cars seen by 'Rommel', otherwise the plucky Brits will be in their blind spot, at least until they fire. 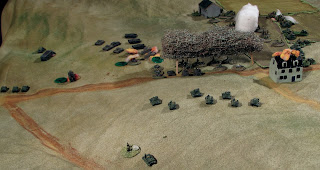 The distant StuGs fire smoke at the advancing impenetrable Char Bs; Belgian House is razed for the hell of it; French infantry plods forward over the fields; the Panzers turn to face the scout car rear attack but the wireless bus gets hosed by Bren fire. 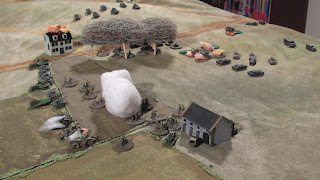 At some point a 99 had been rolled in the game and a wildcard was drawn, the Ace of Spades, enabling the 75mm spotters to 'transport Star Trek style' over to the barn by the fields (possibly they had been heading there under their own initiative and only just informed HQ of their actions??). From here they called in a barrage onto the distant German HQ. 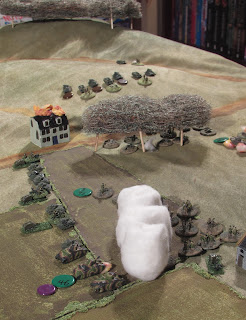 The scout platoon Bren carriers deploy on the brow of the hill, hoping to get a good AT rifle hit on the 150mm SPGs but the MkVIs stay hull down (brown counters).

The Germans now get a wildcard when 100 is rolled (a critical miss, if I had such a thing, by the Panzer 38s at the scout cars!) but they get a 'free 150mm barrage'. Maybe the StuG CO changed frequencies and got ahold of someone, who can say? Anyway, the ground erupted around the French leviathans, destroying the troop leader's tank.
Realizing they had gone further than orders really permitted, the scout cars turned back towards the RVP. One was picked off by the Panzers but another salvo from the 75s rained down on the hapless remainder of the HQ and decapitated the German Eagle.

I am going to either refight this game with the same terrain (less than a quarter of it got used) but with some hedges & fences wich I forgot to put on and not faff about with the German 'attack' quite as much (was the objective the far corner of the board on the high ground or was it to destroy enemy forces en route?) or I may have a follow up on the same battlefield consisting of a German 'reprisal' counter attack.
Posted by Les Hammond at 1:30 pm